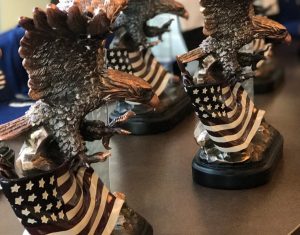 FASTPORT recently announced its top four finalists for “Transition Trucking: Driving for Excellence.” Dedicated to finding America’s top rookie military veteran driver, the program recognizes top drivers who have made the successful transition from active duty to driving for a commercial fleet.

For the fifth consecutive year, Kenworth has teamed with the FASTPORT Trucking Track Mentoring Program and the U.S. Chamber of Commerce Foundation’s Hiring Our Heroes Program. Kenworth will provide The Driver’s Truck™ —a Kenworth T680— as the program’s award to this year’s winner. The Kenworth T680 features the complete PACCAR Powertrain with a PACCAR MX-13 engine, PACCAR 12-speed automated transmission, and PACCAR 40K tandem axles, and includes a 76-inch sleeper equipped with the Kenworth Driver’s Studio package of premium elements for a luxurious, relaxing and comfortable living environment.

“It is important for the trucking industry to continue to offer veterans support and career opportunities. As Kenworth’s way of thanking our military veterans for their service, we are again offering a Kenworth T680…” said Laura Bloch, Kenworth assistant general manager for sales and marketing. “Congratulations to our four finalists and to the other successful drivers who achieved Top 10 status in this
special recognition program.”

About Transition Trucking: Driving for Excellence

In an effort to curb the driver shortage and create immediate jobs for transitioning military personnel, the U.S Chamber of Commerce Foundation’s Hiring Our Heroes Program (HOH), Kenworth, and FASTPORT have come together to award a fully-loaded 2018 T-680 truck to a deserving veteran who enters the trucking industry.

The search for America’s top military rookie driver will educate veterans and America about the support from leading manufacturers and service providers that enhance the safety and comfort of the 3.5 million professional truck drivers while performing their duties — and provide an incredible head start to one veteran’s entrepreneurial career.

The winner will be selected following a year-long competition among veterans, guard members and reservists who have made the successful transition in the trucking industry following military service.

The winner’s T-680 truck boasts a stamped aluminum cab and integral sleeper, and has a manufacturer’s suggested retail price of approximately $155,000. Additionally, the campaign will recognize the employer and CDL credentialing institution that hired and trained the winner.

America’s trucking industry has long been supportive of our nation’s military families, and several major carriers boast a driving population comprised of more than 30 percent veterans.